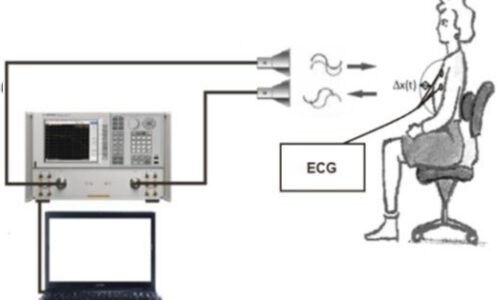 Contactless detection of cardiopulmonary activity for a person in different scenarios

Abstract — Nowadays, contact-less monitoring patient’s heartbeat using Doppler radar has attracted considerable interest of researchers, especially when the traditional electrocardiogram (ECG) measurements with fixed electrodes is not practical in some cases like infants at risk or sudden infant syndrome or burn victims. Due to the microwave sensitivity toward tiny movements, radar has been employed as a noninvasive monitoring system of human cardiopulmonary activity.
According to Doppler Effect, a constant frequency signal reflected off an object having a varying displacement will result in a reflected signal, but with a time varying phase. In our case, the object is the patient’s chest; the reflected signal of the person’s chest contains information about the heartbeat and respiration. The system is based on a vector network analyzer and 2 horn antennas. The S21 is computed using a vector network analyzer. The phase variation of S21 contains information about cardiopulmonary activity. Processing techniques are used to extract the heartbeat signal from the S21 phase.
This seminar presents a comparative study in heartbeat detection, considering different radiated powers and frequencies. The radiated powers used are between 3 and -17 dBm and the operational frequencies used are 2.4, 5.8, 10 and 20 GHz. This helps to make a compromise between the minimum power emitted and the complexity of the measurement system.
In addition, a comparative study of several signal processing methods is proposed to extract the best technique for heartbeat measurement and thus to extract its parameters. Processing techniques are based on wavelet transforms and conventional filtering in order to make a comparison between them. The parameter extracted is the heartbeat rate HR. Measurements were performed simultaneously with a PC-based electrocardiograph to validate the heartbeat rate measurement.
Since the person can move from a room to another inside his home, measurements from the four sides of the person and behind a wall are performed. In addition, a modeling approach based on cardiorespiratory measurement for a person who is walking forward is presented. Furthermore, a comparison between single and two antenna microwave systems for a non-breathing person is carried out to test the accuracy of the single-antenna system relative to the two antenna microwave system. After that, measurements are performed using one antenna microwave system for a person who breathes normally.

Biography — Sarah SAMAD has received a Diploma in electrical and electronics engineering from Lebanese University in 2012, Tripoli, Lebanon and Master Degree in technologies of medical and industrial systems. She got her Ph.D. degree from INSA of Rennes, France and from Lebanese University in 2017. She published 3 journal papers, 5 papers presented in international conferences and 1 book chapter. She worked as a database scripts designer and QA engineer at OSD services, Lebanon.